Western discourse about Palestine or Palestinians is peppered by stereotypes such as “terrorists”, “suicide bombers”, “irrational” or “unreliable” people. These generalizations say more about Western perceptions than Palestinian reality. Sarah Irving’s book deals with the first Palestinian “woman terrorist”, Leila Khaled, in a balanced way, without becoming a hagiography. It is based on interviews with Laila Khaled carried out in Amman, where she now lives; her autobiography; and on some articles published in the “Guardian” and in left-wing magazines.

Leila’s public image has been almost entirely dictated by her defining hijackings of 1969 and 1970. Since then she has become a mother, teacher, campaigner, a member of the Palestinian National Council and a leader in the General Union of Palestinian Women. Like other militants and those labeled “terrorists” – from Northern Ireland to Nicaragua – she has moved from the armed struggle to the political arena. The two hijackings gained her an icon status. 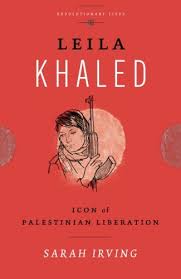 Sarah Irving, currently enrolled at the University of Edinburgh, is a writer for different media outlets, an author of the “Bradt Guide to Palestine” and a co-author, with Sharyn Lock, of “Gaza: Beneath the bombs”. She portrays the “girl hijacker”, like the international press used to call Leila Khaled, not as ruthless person but rather as a child of her time who was expelled from Haifa at the age of five and who had to endure the dismal live of a refugee. To understand Khaled ́s early militancy, it is important to keep the historical context in mind.

Internationally, it was the time of liberation struggles of peoples suffering under Western colonialism and military aggression, including the Vietnam War. The youth of the world were in commotion and protested against the factitiousness of society and complacency and hypocrisy of their parents. The books by Frantz Fanon strongly influenced the radical debate of that period because he provided a moral rationale for “The Wretched of the Earth” to use the power of arms: It was a way to redeem the pride and dignity of colonized peoples. The strategy of armed struggle was discussed worldwide. Che Guevara was killed two years before Khaled undertook her first hijacking in 1969. She had joined the Popular Front for the Liberation of Palestine (PFLP), which was founded in 1967, and she was willing to use hijacking as a “tactic” to bring the Palestinian question to the world ́s attention. She later explained: “Outside of Palestine and the Arab world, the Palestinian question was not visible”. Irving ́s book makes it clear that such actions were not considered a “strategy” for either Khaled or the PFLP. Consequently, she rejected suicide bombings because they were counterproductive to the image of the Palestinian people and their legitimate struggle for freedom from Israeli occupation and self-determination.

Socialized by her family into the Arab National Movement (ANM), traumatized by the expulsion from her birthplace Haifa in 1948, and horrified by the total defeat of the Arab armies in the June war of 1967, she decided to join the PFLP and become a fighter. Getting this assignment as a woman in a patriarchal society was very difficult. Only through dedication and willpower she was chosen by the Central Committee of the PFLP to hijack an airplane. Together with Salim Issawi she boarded a TWA plane from departing Rome for Athens. They ordered the pilot to fly to Haifa, Khaled’s birthplace, before the plane landed in Damascus. With her “Audrey Hepburn lookalike” the hijackers scared but did not harm any of the terrified passengers, writes Sarah Irving. The author characterized Khaled as being “evasive but amiable to the follow passenger trying to chat her up”. For Khaled, harming anybody was beyond the pale. With the celebrity status, which Khaled gained through this hijacking, she felt very uncomfortable.

In order to escape recognition, she underwent several plastic surgeries in Beirut before undertaking the next hijacking. Together with Patrick Arguello, a Nicaraguan-American member of the Sandinista movement, she boarded an El Al flight in Amsterdam bound to New York. Over the English Channel, they tried to force their way into the cockpit, but things went badly for the assailants. The pilot used a nosedive to throw the hijackers off balance. Arguello was shot dead, Khaled was captured. She had to spend a few months in British custody before she was extradited to Syria. She never faced any charges till this day.

Khaled was not born a hijacker. Before she decided to undertake such actions, she studied at the American University in Beirut and worked as a teacher in Kuwait. The tragic history of her people politicized her. Khaled was only married for a short while. After the assassination by a Mossad car bomb of Ghassan Kanafani, a renowned Palestinian writer, the PFLP ordered Khaled underground. Shortly after, she obtained a divorce. For her, writes Irving, “even her most personal affairs must fit, it seems, within the framework of revolutionary commitments”.

Since 1973, Leila Khaled became involved in the Palestinian women ́s movement. Because of her status as a female icon of the Palestinian struggle, her role was always ambiguous, writes Irving. Critics have pointed to the chasm between the respect given to high-profile women such as Khaled, and the ordinary oppression facing women in the Palestinian patriarchal society, both as refugees in exile and under Israeli occupation. Yet, since the early twentieth century, women have been involved in the Palestinian national movement. Their dedications during the Palestinian intifadas are impressive, although the rise of Islamic influence has reduced their visible role. According to Khaled Hroub, Hamas’ women, including those in positions of leadership, are almost invisible to the outside world.

Till the early 1980s, the PFLP avoided any contacts with Israelis. Leila Khaled tells about a “strange” encounter at an international conference, where she was introduced by a Soviet friend to a woman who spoke Arabic with a foreign accent. She said she did not know that woman. Khaled’s friend introduced that person as “Felicia Langer, the Israeli lawyer who defends all the Palestinian prisoners in Israeli jails”. Khaled said OK, nice meeting you, and left. She later recalled: “I was shaking. One of the members of our groups asked what was wrong with me, and (…) tears came. I said: Imagine! Felicia Langer hugged me.” When they heard Felicia Langer speaking, they had second thoughts about their strict anti-Israeli attitude because “this woman talks like us”.

Having learnt a lesson from her encounter with Felicia Langer, Khaled doesn ́t dismiss the possibility of working together with some Israelis. She praises particularly those Israelis who join weekly demonstrations against the Separation Wall at the West Bank. However, she remains skeptical when it comes to Zionist groups like “Peace Now”. Any talk breaks off when it comes to issues such as Jerusalem and the refugees. Khaled sees a difference between those who support the rights of the Palestinian people on principle and those who support Palestinians on humanitarian grounds. Khaled estimates that unless the Palestinian right of return and the question of the land are settled in a just manner, the conflict will go on forever.

Sarah Irving ́s book provides a fair and thorough account of “the poster girl of Palestinian militancy” that inspired not only her own people but also militants in the West. Her biography, from a child of refugees via a “hijack girl” to a mother who works relentlessly for the right of Palestinian women and more generally for her own people, is extraordinary. This book represents a successful launch of the new series “Revolutionary Lives” started by Pluto Press. 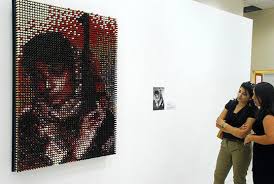