Everyday Politics restores the dignity of real politics, with all its warts and conflicts, as the best way for diverse citizens to build a common life.—William A. Galston, Stern Professor of Civic Engagement, University of Maryland.

The problems with electoral, partisan politics, from soundbites to attack ads, made “being political” an epithet of choice in the 2002 election. Politics’ bad reputation means that theorists of organizational change often see it as a negative. For instance, Peter Senge, Director of Organizational Learning at MIT, famous for developing the concept of the “learning organization,” in which people “expand their capacity to create the results they truly desire,” sees politics as the obstacle. As Senge put it in “The Fifth Discipline: The Art and Practice of the Learning Organization,” “a political environment is one in which . . . there are always ‘winners’ and ‘losers,’ people who are building their power and people who are losing power.” If organizations are to become “learning organizations,” they must “transcend politics.” Higher education reformers write in a similar vein. “Intellectual work that is driven by political forces is not intellectual at all,” wrote William Massy in “Honoring the Trust: Quality and Cost Containment in Higher Education.” He calls on the academy “to rise above politics,” based on its “professionalism, internal discipline, and tradition.” Despite its bad reputation, politics is the way people in any setting deal with differences to get something done. Politics means creating alliances, negotiating, engaging people around self-interests, using levers of change in a strategic way. Politics is how diverse groups of people build a future together. In higher education, disavowal of politics is a sure way to consign civic engagement to marginal status, lodged in centers or courses, or added as a hortatory moment at commencement.

Politics is from the Greek root, politikos, “of the citizen.” For over two thousand years politics meant not parties or vertical relations with the state but rather horizontal engagement among citizens, as the intellectual historian Giovanni Sartori has described. The British political theorist Bernard Crick conveys an older, richer sense of politics in his 1962 work, “In Defense of Politics.” Crick argues that politics finds its enemies in ideology, mass democracy, or technological solutions to complex problems. A technological approach “holds that all the important problems facing human civilization are technical, and that therefore they are all soluble on the basis of existing knowledge or readily attainable knowledge.” The technocrat will “try to reduce all education to technique and training, and its object will be to produce social-engineers to transform society into something radically more efficient and effective.”

For all the troubles of formal “politics,” America in the last generation has also been a laboratory for creative civic experiments. These have generated an everyday politics of negotiation and collaboration that is more concerned with solving problems than with apportioning blame along ideological lines. This different kind of politics, a return and adaptation of older politics widespread through the New Deal in settings such as schools, settlements, unions, and public universities, is rooted in local cultures, not only geographic but also in institutions where people encounter each other on a regular, face-to-face basis. Everyday politics can be called philosophical, based on values such as participation, justice, and plurality, not ideological. It has grown again under the surface of mainstream attention across lines of partisan and other differences around significant public problems, from housing shortages to environmental hazards. 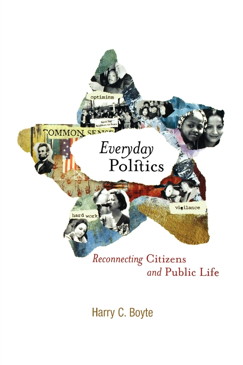 Thus, for instance, the civic education initiative called Public Achievement, now in nine regions of the country, has shown how young people can learn skills of empowerment tied to practical everyday politics. In Public Achievement, teams of young people—ranging from elementary through high school students—work over the school year on public issues they choose. They are coached by adults, teachers, college students, community members, and others, who help them develop achievable goals and learn political skills and political concepts.

In St. Bernard’s, an elementary working class Catholic school in the North End neighborhood of St. Paul, several teams of ten- to thirteen-year-olds worked for four years to build a playground, overcoming neighborhood opposition, negotiating with the city, and raising more than $60,000 from local businesses. To accomplish this task, young people had to learn how to much more than righteous protestors or caring volunteers. They interviewed people, wrote letters, gave speeches, called people on the phone they didn’t know, negotiated with the parish priest, adult school leaders and neighbors. They made alliances, raised money, and did research. They also learned about power, public life, diverse self interests, and politics itself. Beyond skills, the young people involved learned to take themselves seriously in a world that sentimentalizes them. “Citizenship is tackling problems and taking things into your own hands,” said Chou Yang, a Hmong sixth grader at the school. “It means not just sitting back and watching.” College students who coach in Public Achievement also consistently report a dramatic change in their attitudes toward politics. “Coming into PA I thought that citizenship meant to live in the United States and that politics was something only politicians were involved in,” said one student in Joe Kunkel’s class for future teachers, at the University of Minnesota/Mankato, who coached a team in a local middle school organizing a food drive. “But as the year went on, I could not believe how big a role politics played even in a Middle School. The kids and I had to deal with the principal, workers at Hy_vee [supermarket], and people at Echo. I am proud to say the kids handled this all themselves, but I know exactly how big of a role politics will be playing as I enter the teaching world.”

Such hands-on, accessible, and rooted politics is the basis for an alternative to politics as usual in higher education and also the broader society. Everyday politics points toward the civic revitalization of our institutions and the larger democracy alike.

Harry C. Boyte is Co-Director of the Center for Democracy and Citizenship at the Humphrey Institute and on the national advisory board of the American Democracy Project. He is author of eight books on citizenship, community organizing, and democracy including Everyday Politics, Penn Press, forthcoming 2004. Boyte was national coordinator of The New Citizenship, a national, nonpartisan effort to overcome the gap between citizens and government that worked with the Clinton White House from 1993-1995.