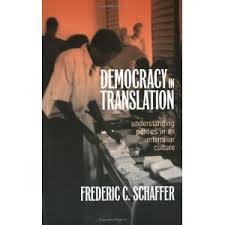 We often think that, if a country adopts electoral democracy, that electoral competition will require politicians to behave in a better, more transparent manner in order to avoid electoral sanctions. But this argument assumes that voters in ‘every’ society cast votes primarily (1) to hold public officials accountable (2) according to standards of public morality. Schaffer argues that, first, Wolof voters do not necessarily vote in order to hold officials accountable, and second, even if they do, they might use standards other than public morality. “The broader point is that similar institutional arrangements in different cultural contexts are not necessarily imbued with similar meaning” (p 115).

Schaffer wishes to show that democracy-building projects in places like Senegal may not have the effects on governmental accountability that we would expect. He proves his point by showing that people do not vote based purely on standards of public morality. But Senegal had had democratic elections for only a decade or so at the time of writing. Schaffer does not consider the possibility that these institutions will change Wolof culture with time. He also examines only the uneducated Wolof voters. Have other voters responded to the new institutions? If so, these changes might eventually trickle down to the uneducated voters Schaffer studies. Finally, Schaffer shows that these Wolof voters differ from the type of voters that Schumpter and Down envisioned–but so do most American voters, especially the uneducated ones. Yet these uneducated American voters can still behave democratically (see Popkin 1991, Lupia and McCubbins 1998, etc.), despite earlier concerns (i.e. the American Voter studies). Should we similarly not be concerned about Schaffer’s wolf cry?